To avoid the worst impacts of climate change, global average temperature rise needs to be limited to 1.5 degrees C (2.7 degrees F), as outlined in the Paris Agreement. That means reaching net-zero carbon dioxide (CO2) emissions globally by midcentury, net-zero GHG emissions soon after and net-negative emissions in the long term.

The path to these goals is multifaceted, and carbon dioxide removal (hereafter referred to as carbon removal) — technologies and approaches that pull CO2 from the air and store it permanently — will be part of the solution.

Emissions reduction is critical and remains the top priority for slowing the planet’s warming. However, it will not be enough to meet our climate goals. More tools are needed, and the Intergovernmental Panel on Climate Change (IPCC), the world’s most authoritative body on climate science, has stated that all pathways that limit global warming to 1.5 degrees C will require some degree of carbon removal, largely to address the huge amount of emissions we have already put into the air. 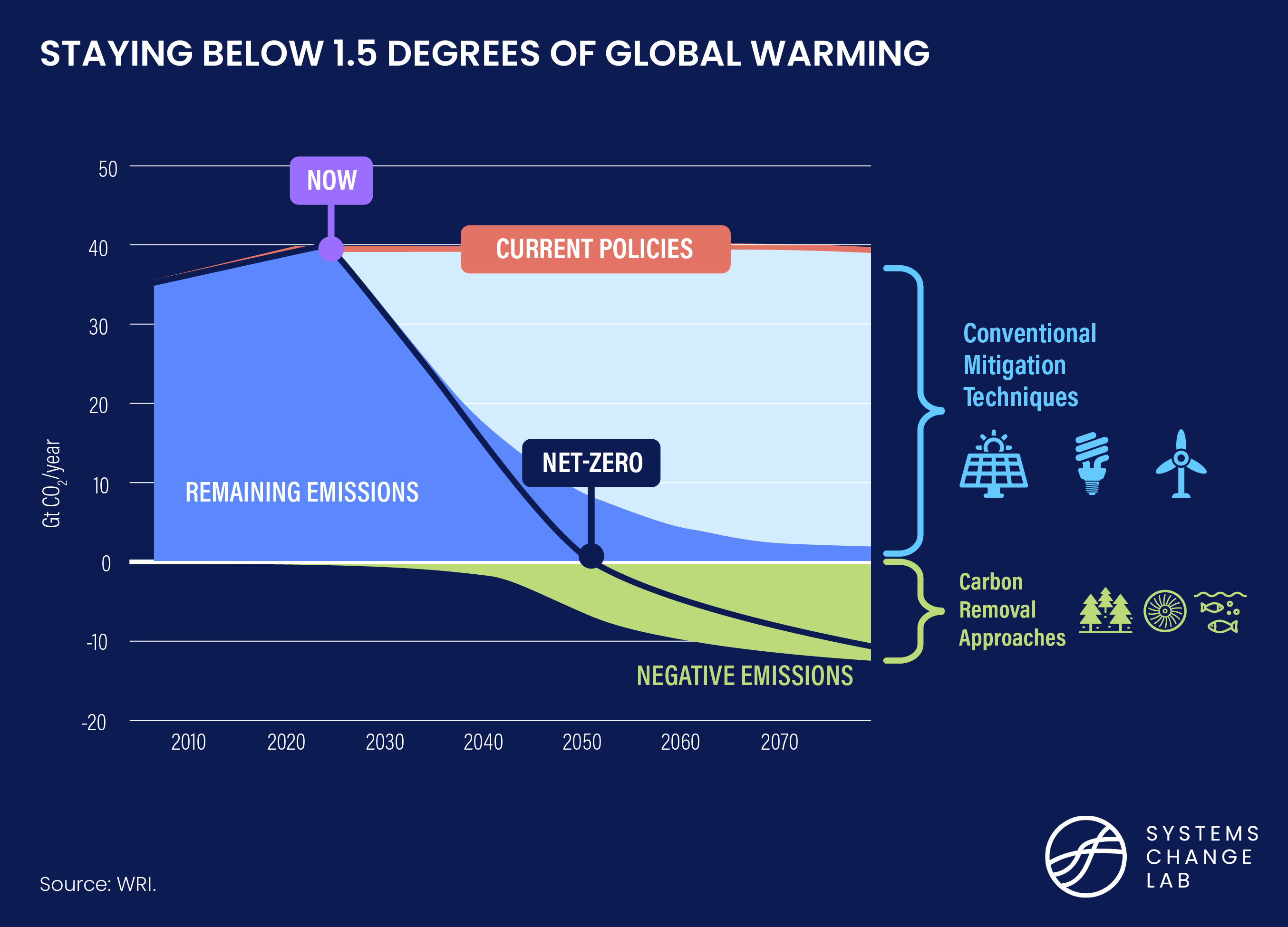 Carbon removal encompasses a range of approaches and technologies — from land-based pathways, like tree planting and increasing carbon in soil, to technologies like direct air capture (DAC), which uses machines to extract CO2 from the air and can be coupled with permanent geologic sequestration. Importantly, carbon removal differs from carbon capture and storage (CCS), which captures CO2 emissions at their source and is a form of emissions reduction.

Large-scale carbon removal can play multiple roles: it can help reduce atmospheric CO2 concentrations, and thus global temperatures, closer to pre-industrial levels in the long run, and in some cases can compensate for emissions from sectors that will be difficult to fully decarbonize by midcentury, such as agriculture. However, carbon removal cannot be a substitute for deep and rapid emissions reductions, which are urgently needed.

At the same time, some approaches — particularly nature-based approaches — face challenges related to the permanence of sequestered carbon. Other approaches present sustainability concerns, and many are costly. So, while we will very likely need some amount of carbon removal, we need to minimize that amount by reducing emissions as quickly as possible in the near term.

To realize the full potential of carbon removal, we’ll need a broad portfolio of natural and technological options. Here, we focus on options that are generally considered to be technological. Faster scale-up of these technologies will require addressing several barriers that exist today.

Carbon removal, because it is a public good, will always rely on regulatory requirements, subsidies or other support (unlike renewable energy solutions, for example, which provide electricity that people need as well as decarbonization).

Other barriers include insufficient enabling infrastructure (for example, accessible geologic storage), insufficient demand for carbon removal, challenges related to carbon accounting for some approaches, lack of comprehensive governance frameworks and lack of broad public knowledge of and support for large-scale carbon removal. Importantly, further research, development, and demonstration funding is also needed to ensure that carbon removal technologies — which are generally not commercially available yet — are ready for widespread, commercial use in the coming years and decades.

Important progress has been made in recent years on most of these issues, but much more is needed to meet global climate goals. 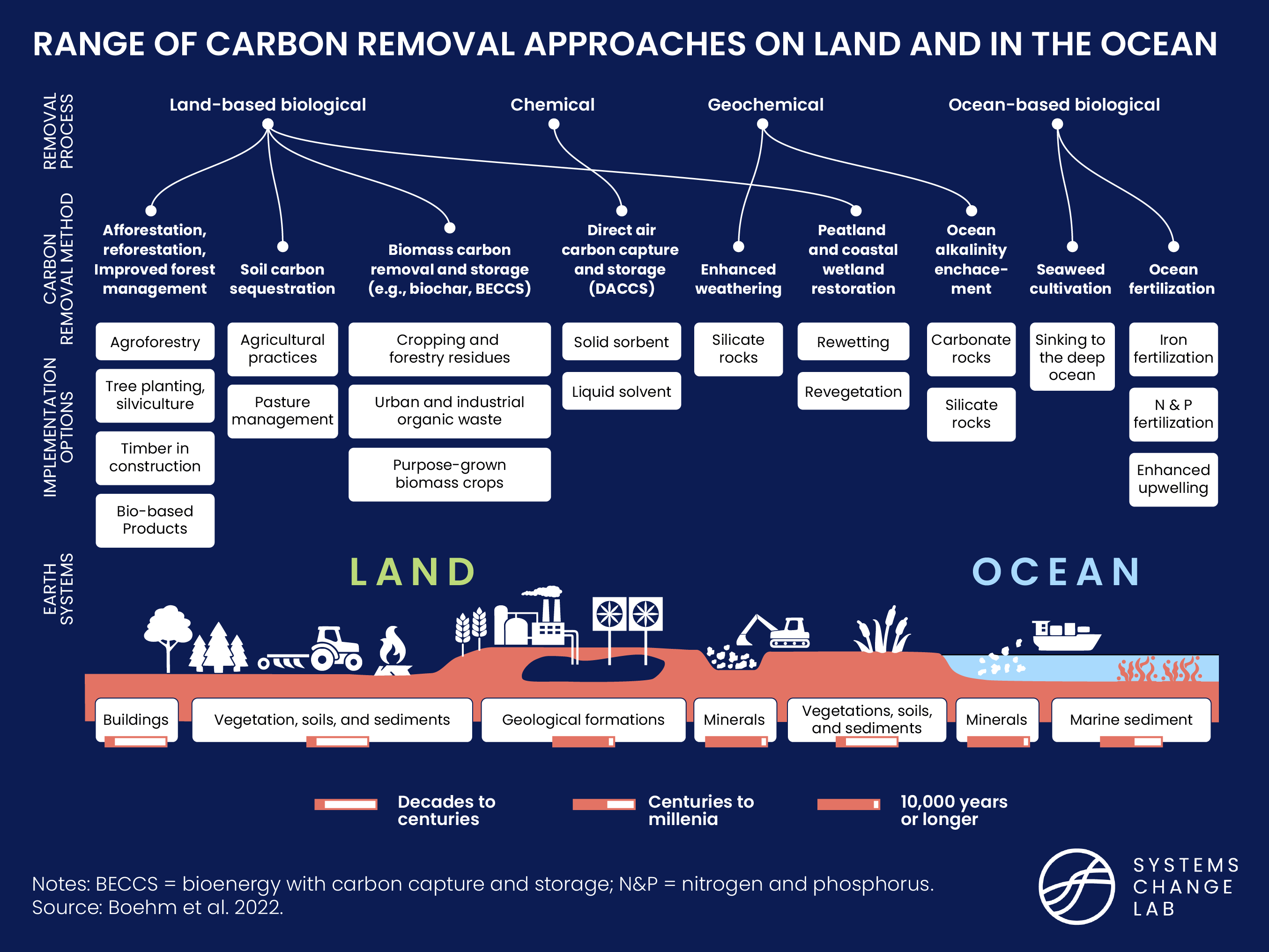 Interest and investment in carbon removal technologies grew significantly after the IPCC’s 2018 Special Report: Global Warming of 1.5°C, the findings of which were reaffirmed in its subsequent 2022 report. Both indicate the likely need for hundreds of billions of metric tons of carbon removal by the end of the century, depending on the scale and pace of emissions reductions in the coming decades.

The faster emissions can be reduced in coming years, the less carbon removal will be necessary.

The reports spurred a proliferation of national and corporate net-zero targets. The Science Based Targets initiative reports that 1,399 companies had net-zero commitments as of October 2022, which has driven growing corporate interest in carbon removal. And 25 of the 53 Long-Term Strategies submitted by governments to the U.N. Framework Convention on Climate Change (UNFCCC) as of October 2022 include plans to use technological carbon removal.

These plans and commitments show growing public and private interest, but many still need increased transparency and more detail around how carbon removal technologies will be used.

With greater recognition of the need for carbon removal, initiatives and investments are growing. Mission Innovation, a global initiative to accelerate research, development and demonstration investment for clean energy and technology, added a carbon removal mission and set a goal of achieving a net reduction of 100 million metric tons of CO2 (MtCO2)/year by 2030.

The Carbon Removal XPrize is offering $100 million for scalable carbon removal technologies or approaches. The governments of Australia, Canada, Japan, the United Kingdom and other countries are increasing federal research, development and demonstration funding for carbon removal.

DAC, a leading carbon removal technology, has earned particular attention. DAC was identified as a key technology under the World Economic Forum’s First Movers Coalition in 2021. The $1.5 billion Breakthrough Energy Catalyst fund has also targeted DAC as a critical technology that will underpin a low-carbon economy. And Climeworks, a DAC company in Switzerland, has received a record $650 million in investment funding.

In the United States, government interest in carbon removal has skyrocketed over the past several years. Federal investment in research has grown from less than $10 million in 2019 to $129 million in 2022. In late 2021, a major infrastructure law provided $3.5 billion — the largest influx of funding for carbon removal ever — to build four “DAC hubs” that can each capture and store or utilize 1 MtCO2/yr.

In 2022, another spending bill increased the credit level for each metric ton of CO2 sequestered — up to $130–180/tCO2 for DAC. The Department of Energy also announced a “Carbon Negative Shot” initiative to reduce the cost of carbon removal to $100/tCO2 removed, focused on pathways that can reach gigaton scale.

The private sector is also stepping up. Companies like Stripe, Microsoft and Shopify have invested hundreds of millions in early purchases of carbon removal — through technologies and more natural approaches — and made efforts to make their processes transparent.

In April 2022, a coalition of corporations launched the Frontier Fund, committing to purchasing $925 million in permanent (defined by Frontier as storing carbon for over 1,000 years) carbon removal between 2022 and 2030. This is the largest private sector investment to date and provides a demand signal for carbon removal suppliers to make investments.

This level of action is far beyond anything that was happening just five years ago. Carbon removal, little known before 2018, is now recognized as a critical tool to achieve our climate goals, and the first generation of large-scale carbon removal projects is expected to debut in the next several years.

Despite these successes, there are some concerns about the growing momentum. Some see carbon removal technologies as a distraction from the needed focus on and investment in near-term mitigation, noting that most are not yet demonstrated at commercial scale, and others have questioned the local environmental and health impacts, as well as the broader impact on sustainability goals.

Robust policies and governance mechanisms for carbon removal will be foundational to build public trust and understanding. They will create the guardrails that ensure processes are credible, sustainable and equitable.

At the international and national levels, these could include guidance around how much carbon removal can be used in corporate or national climate plans; how to monitor and verify results credibly and consistently; and how to consider economic, environmental and other trade-offs across approaches.

At the project level, consideration of environmental and social impacts will be essential, as will assessments to identify optimal siting. Communication will be key. Engaging with communities early and providing opportunities for input on project configuration and local benefits will be critical to the long-term success of carbon removal projects.

Because technological carbon removal is a new industry, we have the opportunity to help shape and direct its development from the outset.

Even with deep emissions reductions, all pathways that limit warming to 1.5 degrees C include carbon dioxide removal. Encouragingly, carbon removal has already made big strides, transforming in just a few years from a little-known concept to a well-defined need. As the industry takes off, it presents an opportunity to help define the rules of the road for scaling up.

Systems Change Lab has identified indicators to track progress toward targets. Hover over a chart and click to explore the data.