Every day, governments, financial institutions and companies make financial decisions that maintain and expand an unsustainable economy or replace it with a sustainable one. They either build and maintain physical assets and implement land-use changes that emit greenhouse gases (GHGs) and degrade nature, or create a sustainable, resilient economy compatible with a stable and livable climate. Either option requires vast amounts of physical infrastructure, backed by equally vast pools of capital from the financial system.

Leaders in both the public and private sectors are needed to shift the financial system.

There is no substitute for governments. They must invest in the decarbonized economy, regulate and price GHGs and other environmental harms, and protect and include marginalized people. Their actions can ensure that the rules of the financial system take climate and equity into account.

Business leaders must also show ambition. They can commit to targets, strategies, innovations and capital plans that align with climate goals, seizing the opportunity to create a sustainable, net-zero carbon economy within 30 years.

Ultimately, however, financial markets allocate financial resources based on expectations about the future. If financial institutions believe a high-carbon future is the riskier path, with less economic opportunity than a sustainable alternative, they will shift more capital into a sustainable, decarbonized economy. This will make financing high-carbon activities more expensive, or even impossible. The financial system will shift when public and private economic leadership changes those expectations.

Capital investment is shifting toward a Paris-aligned, sustainable economy

Market expectations have begun to shift. Capital investment, expenditure to build new real assets or operate and maintain old ones, is now at an inflection point. The International Energy Agency (IEA) expects capital investment in the low-carbon economy — from clean power, clean fuels and carbon capture and storage (CCS) to batteries, electric vehicles (EVs), and buildings — to reach $1.44 trillion in 2022, while capital investment in fossil fuels production and power generation is expected to reach $952 billion. Regulators are also beginning to require climate data be included in the flow of information that underpins investment decisions, further accelerating shifts of capital.

Finance is not shifting fast enough

The world’s financial flows, enabling the capital investments described above, remain off track from securing the future we want. 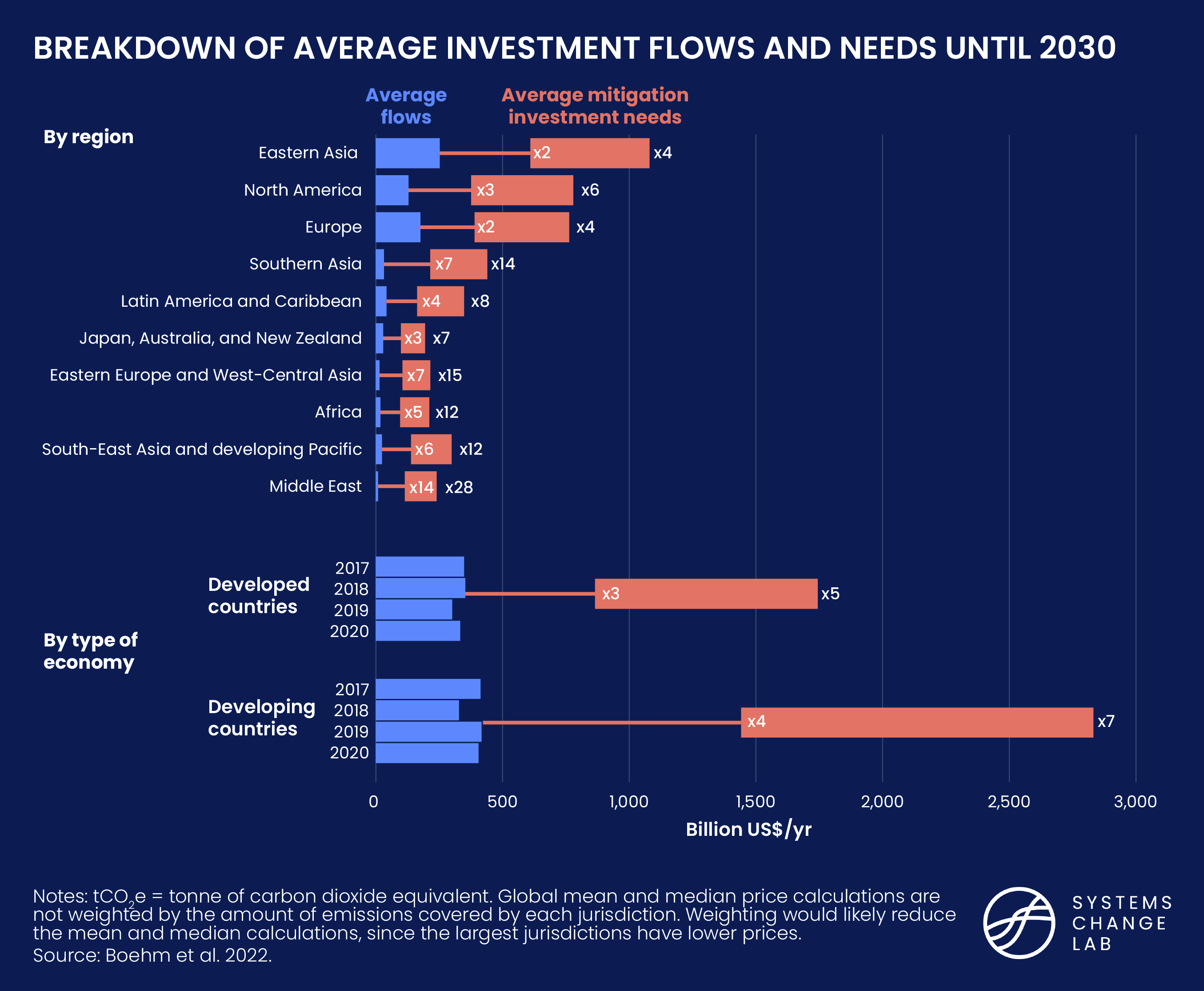 Climate Policy Initiative estimated a total of $640 billion in climate finance flows, public and private, in 2020. According to World Resource Institute’s State of Climate Action 2022, roughly $5 trillion of climate finance per year by 2030 is necessary to prevent the worst impacts of climate change. Similarly, protecting the world’s ecosystems and biodiversity requires $354 billion per year invested in nature-based solutions by 2030. (The current financial flows total about $132 billion per year.)

Climate support from developed countries to developing countries is still only about 80% of the way toward the promised $100 billion a year, and governments are just beginning to consider and track whether their climate investments will bring underserved and/or marginalized communities into the green economy.

If financing continues on this track, companies’ planned capital investments in fossil fuels will burst the carbon budget. 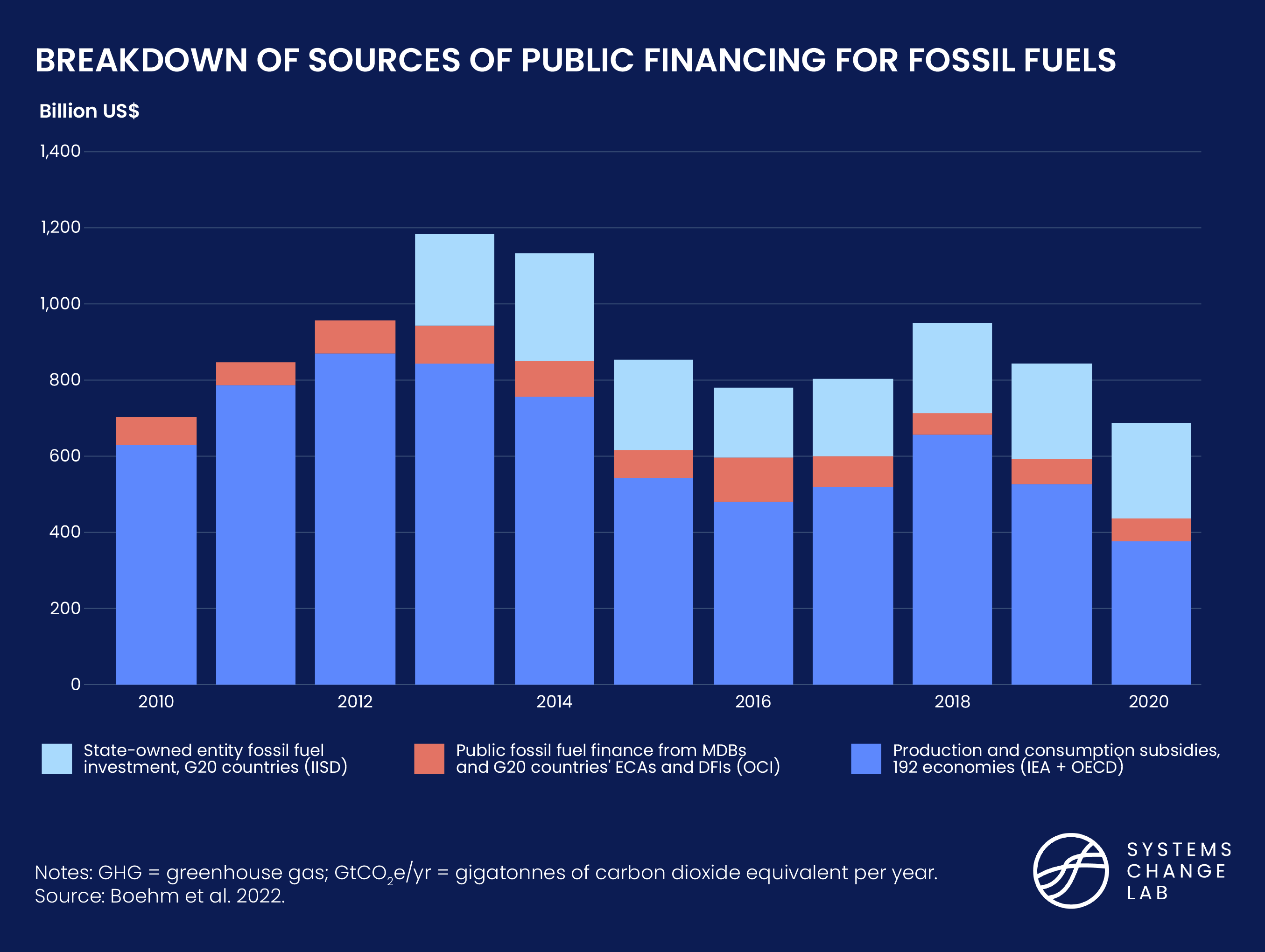 The financial system we need

As the green economy grows — and it must grow faster — further capital investment in fossil fuels must be avoided. Existing assets must be rapidly wound down and the financing that backs those investments must dry up. The green economy must also be just and equitable. Additional funds must be transferred from developed to developing countries, and all countries must ensure that growth of this more sustainable economy benefits groups that were underserved and/or marginalized by the high-carbon economy that it replaces.

Action, though accelerating, still lags far behind the rhetoric. The good news is, we know what needs to change and how to do it.

The shift 6 shifts needed to transform the Finance system

Measurement of climate- and nature-related risks helps companies target investments and interventions that advance sustainable business transformation, greenhouse gas emissions reductions and climate adaptation efforts, and are needed for other market stakeholders — like financial institutions and regulators — to deploy capital efficiently and monitor and manage risks at a portfolio or systemic level. Risk integration by itself will not set the global economy on a path to net-zero GHG emissions, but it will accelerate the movement of capital in response to other system shifts.
To unleash the power of the public sector in achieving climate and biodiversity goals, we need government leadership that reflects the urgency of climate action, persistent demand for accelerated change from civil society, public financial institutions designed for these goals, and coordinated monetary and fiscal policy to support large public investments.
Because the private sector accounts for roughly two-thirds of economic activity in most economies, it must participate in the transition to net-zero emissions around mid-century and protect nature. Financial and non-financial corporations are making commitments and setting targets to align their financial portfolios and balance sheets with net-zero and broader sustainability objectives. These financial commitments need to cause real-world changes that support decarbonization and protect nature and biodiversity.
A just transition toward a decarbonized, sustainable economy will result in more inclusivity and fairness than the high-carbon, unsustainable economy it leaves behind. It will give underserved and/or marginalized groups new economic opportunities for high-quality employment and enable their participation in the benefits of thriving, sustainable industries. A just transition will also offer further options to expand financial inclusion, extending financial services to all people, especially underserved and/or marginalized groups.
Setting prices on pollution and harmful activities can be an effective instrument to tackle the unintended impacts of society’s consumption and production decisions. Governments can “price” environmental impacts by directly taxing activities that cause them, or by creating market-based mechanisms like emissions trading schemes.
Public and private investments and public subsidies continue to support activities incompatible with a sustainable future — the development of new fossil fuel reserves, overfishing, land-degrading agricultural practices and more. These financial flows must stop and be redirected to support a sustainable, decarbonized economy.

Systems Change Lab has identified indicators to track progress toward targets. Hover over a chart and click to explore the data.